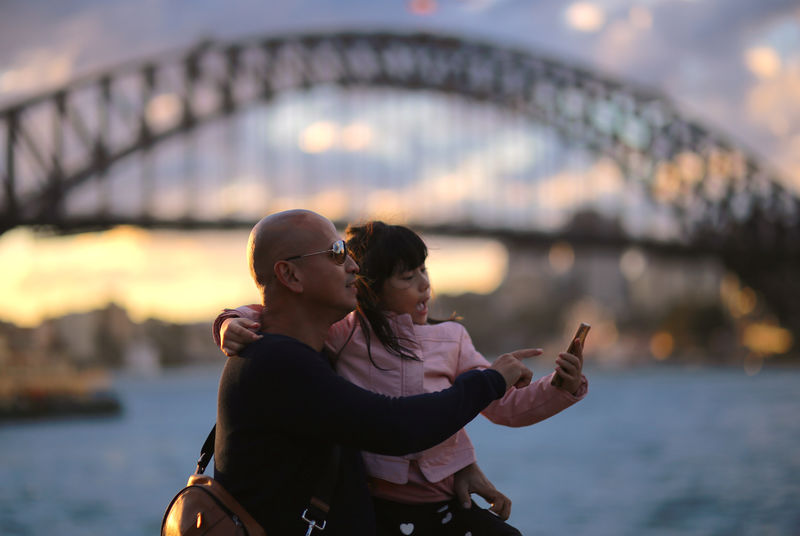 © Reuters. FILE PHOTO: Tourists look at a phone as they stand in front of the Sydney Harbour Bridge at sunset in Australia

SYDNEY (Reuters) – The number of Chinese visitors to Australia ticked up in July though the annual pace of growth slowed to the equal weakest in nine years, in a sign the Sino-U.S. trade war and sluggish economic growth were hurting mainland tourists’ travel plans.

China is the largest source of tourists to Australia.

Monthly data from the Australia Bureau of Statistics (ABS) showed 122,300 mainland Chinese tourists made their way Down Under in July, higher than the 12-month average of 120,600.

However, the annual growth rate slowed to 1.1%, matching the level recorded in May, the weakest in nine years. The pace has slowed from around 13% in late 2017 and early 2018, suggesting the trade war is having an impact on tourism.

The deceleration was being offset by a record number of Canadian and American visitors, the data showed, largely helped by a weaker Australian dollar.

Over the past year, a record 497,700 Canadian tourists and 189,900 Americans visited Australia. The number of Indian visitors also surged to all-time highs in the year to July.

The monthly ABS series is an indicator of the health of Australia’s tourism sector. The data underlines that steps taken by Tourism Australia to attract high-value travelers from other Asian countries, including India, are bearing fruit.

Tourism and education are Australia’s third largest exports after iron ore and coal.

“Spending by international tourists is the lifeblood of many Aussie cities and towns,” Felsman added.

“The near-record inflow of long-term arrivals/permanent residents to Australia will continue to support broader economic activity and spending, especially the housing market with its recovery.”