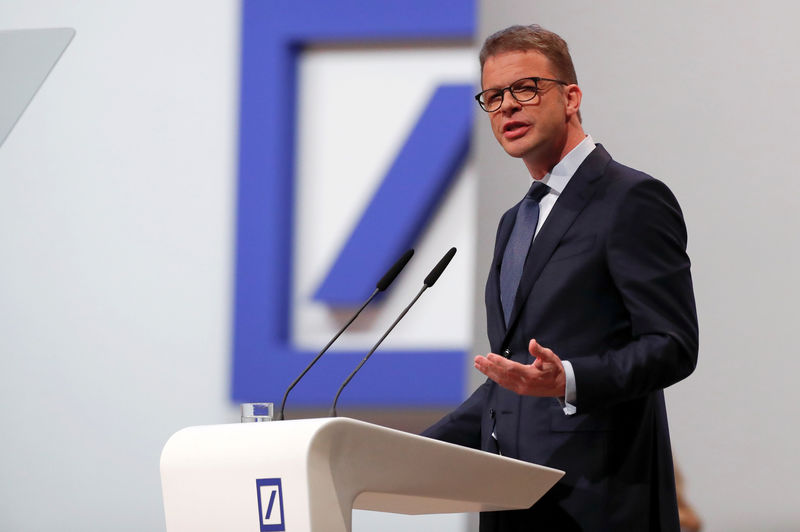 By Sinead Cruise and Tom Sims

LONDON/FRANKFURT (Reuters) – Deutsche Bank (DE:) investors will press Chief Executive Christian Sewing on how he will deliver on revenue growth targets during a global roadshow to win backing for his 7.4 billion euro ($8.4 billion) ‘reinvention’ plan.

Shares in Germany’s biggest bank rose by 2.1% on Wednesday, recouping some of a near 10% drop, the biggest two-day drop in almost three years, since it detailed a sweeping overhaul involving 18,000 job cuts on Sunday.

The revamp also includes the creation of a ‘bad bank’ to house billions of euros of costly trading positions and relieve pressure on Deutsche Bank’s stretched balance sheet.

Some investors told Reuters they doubted these moves, along with scrapping Deutsche Bank’s global equities division, would be enough to turn around its flagging fortunes in the face of intense competition and low interest rates.

Deutsche Bank said it was targeting an 8% return on tangible equity (ROTE) by 2022 but flagged “significant uncertainty” that it would break even in 2020.

Others said they were worried Deutsche Bank would backtrack on a pledge not to tap shareholders for additional cash, particularly in view of its capital constraints.

“The revenue growth targets are difficult to believe,” one fund manager said, speaking on condition of anonymity.

“DB hasn’t managed to grow revenues for several years now – why that will change after the impact of a big restructuring remains unclear.”

Deutsche Bank’s management is also expected to meet staff rattled by the proposed changes and the sudden departure of colleagues who vacated desks across three continents on Monday.

The bank is quitting its entire presence in some Asian markets but has so far kept the finer details of layoffs in the United States, Germany and other parts of Europe under wraps.

Deutsche Bank was criticized by members of the public and financial sector commentators on social media when upmarket tailors were seen leaving its London offices after a suit fitting with senior managers, on the same day hundreds of staff were fired.

Sewing on Monday told analysts that while his restructuring plan may sound familiar to those who have followed Deutsche Bank’s previous attempts to overhaul its sprawling business, this restructuring was not the same.

“It is different this time. We are different.”

Sewing plans to invest a quarter of his 820,000 euro fixed salary in the bank’s shares, which hit a record low last month, a person with knowledge of the matter said.